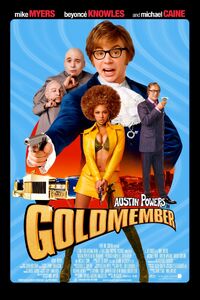 Austin Powers (Mike Myers), having conquered the '90s and the '60s, travels back to the 1970s and teams up with his arch-nemesis Dr. Evil (also played by Myers) to thwart a new villain, Goldmember (Myers once again). Myers also plays Fat Bastard for the second time, this time parodying the kind of "wire fight" seen in Crouching Tiger, Hidden Dragon. The film also stars Beyoncé Knowles as Foxxy Cleopatra (parodying a blaxploitation movie heroine), Michael York reprising the role of Basil Exposition, Verne Troyer in his second appearance as Mini-Me, and Michael Caine as Austin's father Nigel Powers (compare the appearance of Indiana Jones's father in Indiana Jones and the Last Crusade). There are a number of cameo appearances by top stars and icons including Britney Spears, John Travolta, Gwyneth Paltrow, Danny deVito, Kevin Spacey, Tom Cruise, Quincy Jones, Steven Spielberg and The Osbournes.

The film is a loose parody of the James Bond movie Goldfinger. The title of the film led to legal action being taken by MGM, the distributors of the James Bond film franchise, that briefly led to the film's title being removed from promotional material and trailers. The dispute was quickly resolved and the film title remained unchanged.

The movie sold about US $288 million in movie tickets worldwide.

While Austin Powers shoots "Austinpussy" (a spoof on the James Bond film Octopussy), a movie based on his life, Dr. Evil, in a new lair behind the infamous HOLLYWOOD sign, unveils his new plan. Dr. Evil plans to travel back to 1975 to bring back a Dutchman named Johann van der Smut aka Goldmember, so named after an "unfortunate smelting accident" in which he lost his genitalia. Goldmember designed a tractor beam, called Preparation H, to pull a molten meteor of gold to earth, striking the polar icecaps, consequently flooding the Earth. Austin barges in with the British Secret Service and arrests Dr. Evil.

Austin is knighted for his services but is disappointed when his father, the famous super-spy Nigel Powers, does not attend the event However, while Austin is with the twins Fook Mi and Fook Yu he is informed by Basil Exposition that his father Nigel has been kidnapped, the only clue is that the crew of his yacht have had their genitalia painted gold. Austin seeks help from Dr. Evil, who refuses to help unless he's transferred to a regular prison to be with Mini-Me. Austin agrees, and is told that Nigel was kidnapped by Goldmember.

Austin goes to 1975, and meets up with an old flame, Foxxy Cleopatra. The two find Nigel, but Goldmember escapes in a time machine to 2002. Austin and Foxxy retreat to Austin's time-traveling 'pimp-mobile', and follow. Meanwhile, Frau tells Dr. Evil that Scott has become more evil to the point of losing his hair, and slips him a key to his handcuffs. During a prison riot, Dr. Evil and Mini-Me escape to Dr. Evil's new lair in Tokyo Bay - a gigantic submarine shaped like the good doctor.

At the said new lair, Scott gives Dr. Evil the "frickin' sharks with frickin' laser beams attached to their frickin' heads" that he's always wanted since the first movie, and Dr. Evil accepts Scott as finally being evil enough. A rejected Mini-Me is sent from the main chamber, but not before giving Dr. Evil the finger.

Now in Tokyo, Austin and Foxxy discover that the businessman Mr. Roboto is in charge of building Goldmember's tractor beam. Infiltrating Roboto's factory, they find Goldmember holding Nigel hostage. Austin and Foxxy rescue Nigel, but Goldmember escapes with the tractor beam power unit. & Fails crashing to a BIG GAWZILLA!!!! (Godzilla). Austin and Nigel reveal their deep-seated feelings of disrespect for each other, to the point that Austin accuses Nigel of being a bad father. The two part ways.

Mini-Me joins Austin (even dressing up like him), and with Foxxy and Mini-Me, Austin sneaks into the sub. Austin is captured by Dr. Evil's henchmen, but Foxxy and Mini-Me quickly rescue him. Nigel appears and reveals the shocking secret that Austin and Dr. Evil are brothers, and that Dr. Evil's real name is Dougie. Scott, enraged that he has finally become evil, only for his father to turn good, flees from the chamber.

Scott and Goldmember were up to something. Goldmember appears and declares that his plan goes on as planned. He activates the tractor beam, but Austin and Dr. Evil work together to reverse the beam's polarities, destroying it and blowing up the meteor. The two brothers enjoy the premiere of Austinpussy, while, in Dr. Evil's Hollywood lair, Scott dances around, now dressed in black and completely bald. During the End Credits, Britney Spears is shown talking to Mini-Me asking him if she can give him her cell phone number after he whispers in her ear about his "kickstand", and he nods, "Yes."