Spears appeared in Goldmember as herself. Austin busts in on her during a dance routine. He works his mojo on her and being a fembot her head blows up. She is also seen at the end of Goldmember talking to Mini-Me asking if she can give him her cell phone number.

The Britney Spears fembot had light brown eyes, blonde hair, a slim, curvaceous body, c cup breasts and a toned belly. Her outfit consisted of black leather pants reaching down to her knees, several bangles on her right wrist, a black leather cufflet on her left wrist, black, high-heeled boots, a navel piercing and a dark green and black leather and suede woven bra top. 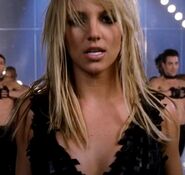 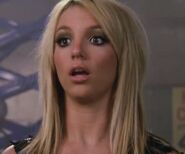 Machine gun barrels coming out of Britney's bra, revealing her to be a fembot

Britney gets ready to fill Austin Powers with lead

Britney and her boy slaves 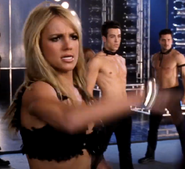 Close-up of Britney's breast machine guns while in use 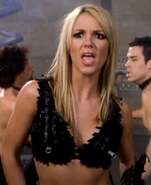 Panned out side view

Britney nearing her end. Notice a change in her breasts.

A close up of Britney's fembot bra. Notice her large breasts. 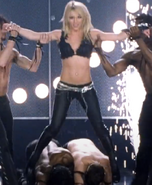 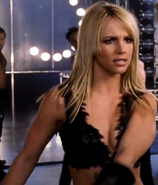 Real Britney Spears hanging out with Mini-Me as she asks him to give him her cell phone number during the end credits
Add a photo to this gallery
Retrieved from "https://austinpowers.fandom.com/wiki/Britney_Spears?oldid=7662"
Community content is available under CC-BY-SA unless otherwise noted.