From the first film, while in group therapy with his son Scott, Dr. Evil talks about his early life.

"My father was a relentlessly self-improving boulangerie owner from Belgium with low-grade narcolepsy and a penchant for buggery. My mother was a 15-year-old French prostitute named Chloe with webbed feet."

At the age of 12, I received my first scribe. At the age of 14, a Zoroastrian named Vilma ritualistically shaved my testicles — there really is nothing like a shorn scrotum — it's quite breathtaking... I suggest you try it. At the age of 18, I went off to evil medical school. At the age of 25, I took up tap dancing. I wanted to be a quadruple threat. An actor, dancer.

In the second film's deleted scene on Jerry Springer, he shared the following secrets:

However, in the third film it is revealed that his natural mother died in a "car accident". Later, Nigel Powers adds to this story, saying it had been a family holiday. He had stepped away from the car when it had exploded in an assassination attempt. Both Austin and Dr. Evil survived, but Nigel thought that only Austin had lived. He would have told his lost son earlier, but his adoptive parents raised him to be evil.

His real name is revealed to be Douglas Evil Powers in the third film.

Dr. Evil is unquestionably a genius. Inventing numerous "evil" devices to further his goals which tend to shift between global domination and global destruction fairly frequently. He has, however, described himself as a "hands off" type of genius meaning he prefers others to do the manual work for him. Those others, he would like, are deaf and blind so they can't see the good guys coming. He feels he doesn't need an adversary; he could be better off just winning. Therefore, he is his own worst enemy.

Though he has a high degree of intelligence he is prone to absent mindedness, childishness and has a tendency to do things counter productive to his plots. Such as leaving Austin in easily escapable death traps even when his son points out that he could just shoot him. He can be extremely immature, speaking over Scott when his son is trying reason with his fathers line of thinking, or bullying Number 2 when he he also points out fault in Dr Evils plans. He list the key elements to a good world domination plan:

3. Closed circuit TV to talk to the President/UN 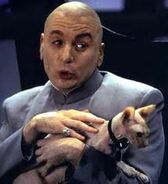 Add a photo to this gallery
Retrieved from "https://austinpowers.fandom.com/wiki/Dr._Evil?oldid=6788"
Community content is available under CC-BY-SA unless otherwise noted.