Austin Powers in Goldmember
"Get in my belly!" - Fat Bastard

Stuart Hope, more commonly known as Fat Bastard, is the tertiary antagonist of the Austin Powers franchise. He is one of Dr. Evil's henchmen.

He alludes to being bullied and mocked for his weight as a child, and in his depression and loneliness turned to eating, creating a vicious cycle. Subverted when his acknowledgment of this problem becomes an Ignored Epiphany, and he remains a Reoccurring Informal Lard-ass in the third film. He repeats the sob story there, implying he uses this trope to justify his behavior.

He is said to have red hair. An immensely obese (weighing in at a metric ton) henchman turned Semi-Pro Sumo Wrestler hailing from Scotland, Fat Bastard served Dr. Evil in his quest to defeat Austin and conquer the World. In his attempt at victory in a fisticuff with Austin, he calls out "I hope my wire fighting team is ready!!" he then breaks the wire because he weighs a metric ton. He is noted for his foul temper (and foul-smelling shits), his frequently breaking wind, and his unusual eating habits, namely a taste for babies (and anything that looks like a baby, e.g. midgets). He tries to refuse Dr. Evil's money for his services in exchange for eating Mini-Me. (A commonly repeated quote is him saying to Mini-Me "I'm bigger than you, I'm higher in the food chain! Get in ma belly!"). This cannibalistic feature of Fat Bastard shows he is no man but a savage beast that will shit and eat anything in his path. He has a penchant for singing the Chili's Babyback Ribs song. Fat Bastard has problems controlling his defecation patterns, as evidenced by his constant remarks of "turtleheads" and "skid marks." His lack of appreciation for others having to deal with his stench extends into a sort of self-pride about the subject, especially in regards to his flatulence and the "leavings" he produces for those performing his Sumo laundry duties. When participating in Sumo matches, he wears a tartan mawashi, which could potentially help to disguise his skid marks.

Some have stated that the characters appearance changed considerably in the third film compared to how he looked in the second. This was primarily due to some changes in the make-up to make the character look more realist. Fat bastard loves eating babies as he describes it as the "other, other white meat"

When Dr. Evil goes back to 1969, he plants Fat Bastard in the British Ministry of Defense. Fat Bastard uses a special set of bagpipes to spew a knockout gas that knocks out the other guards. With the other guards incapacitated, Fat Bastard took out a drill and bore into Austin’s cryopod, aiming for Austin’s groin. Laughing cruelly, he then injected a large syringe into Austin’s family jewels and extracted his mojo from it, causing Austin Powers to instantly become impotent in the middle of sex in 1999 due to his mojo suddenly vanishing.

Fat Bastard then took the vial containing the mojo to Dr. Evil at his secret volcano lair where he was to exchange the mojo for money. However, upon discovering Dr. Evil’s smaller clone Mini-Me and believing him to be a baby, he developed a cannibalistic hunger for Mini-Me. Fat Bastard offered to give Dr. Evil the mojo and let him keep the money if the evil genius gave Fat Bastard Mini-Me to eat. Mini-Me takes the mojo from Fat Bastard, avoiding being captured by the cannibal, forcing him to simply accept the money.

Later, Fat Bastard has a one-night stand with Felicity Shagwell, though she was only trying to get close enough to him to plant a tracking device on him, which she ends up inserting into his rectum. The Scotsman takes this as foreplay and proceeds to roll onto Felicity for another round of sex, nearly crushing her with his immense weight. Unfortunately, he ends up defecating the tracking device into a toilet in Paddington Station. However, testing the stool sample reveals the location of Dr. Evil's lair.

When Austin and Felicity arrive at the volcano lair, the two are promptly captured and brought before Dr. Evil. In a slight against Austin, Dr. Evil sets up the revelation that Felicity slept with Fat Bastard the night she tried to shag Austin. Fat Bastard teases Felicity’s sexual prowess, calling her “crap.” He also laughs maniacally at this, hurting Austin deeply, as the International Man of Mystery now knows that not only did his most recent lover sleep with someone else, but the person she slept with was the person who stole his mojo and gave him erectile dysfunction.

After Austin and Felicity return to 1999, Fat Bastard attempts to kill them by disguising himself as a UPS Delivery Man and breaking into Austin's pad. However, Felicity easily disarms him and gives him a swift kick in the crotch also for calling her crap in bed . He groans and tries to grab his crotch to cradle his genitals but he is too fat , he says she hit him adroitly in his “mommy daddy button . “ he yells and passes out causing an earth quake .

A few years later, Fat Bastard quits working for Dr. Evil and tries going legit by becoming a sumo wrestler, he was skilled but the mawashi caused his testicles to rub together and burn.

He also tried to lose weight by going on "The Zone" diet. He ends up getting in a fight with Austin, who is looking for information on Goldmember, but loses when one of his wires breaks during a wire-fighting scene. Later, he succeeds at losing weight by going on the "Subway Diet" and ends up losing 180 pounds, which leaves him with a lot of excess skin and a "neck that looks like a vagina."

Tarrare was a French showman, soldier, and spy who lived in the 18th century. He was known for his seemingly endless appetite and unusual diet, routinely eating his own weight in a single day. Like Fat Bastard, Tarrare had extremely severe body odor, fecal odor, and flatulence. At one point he was even accused of eating a baby.

As a secret agent, Tarrare would swallow documents whole and then recover them from his stool when he reached his destination.

One key difference between the two is that Tarrare was not actually fat; he was in fact very thin as a result of his metabolism, but his stomach capacity was so large that he would blow up like a balloon and look fat once his stomach was filled. When not full, his excess skin hung so loosely that he could wrap it around himself. Thus, when he was hungry he would have more closely resembled "Thin Bastard". 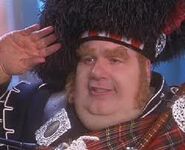