Felicity Shagwell ("Shagwell" by name, "Shag-very-well" by reputation), portrayed by Heather Graham, is the female accomplice of Austin Powers during the events of Austin Powers: The Spy Who Shagged Me and a member of the CIA.

She is known for her alleged sexual prowess having seduced Dr. Evil's overweight Scottish accomplice, Fat Bastard. She flirts with Austin with rabid vigor and has a strong desire to have sex with him. She claims Austin was her inspiration for becoming an agent. She tries to seduce Austin in his 1969 Shag Pad, but is turned her down due to the assumed loss of his Mojo. He later admits this and apologizes. When Austin's Mojo is supposedly destroyed by Dr. Evil, she explains to him that he never lost his Mojo or, at the very least, a significant enough portion of it to effect his sexual prowess.

In at least one alternate timeline, she is suffocated via gas by Dr. Evil.

Felicity is introduced to Austin directly following the assassination attempt by Dr. Evil, where Austin was nearly incinerated by one of Dr. Evil's fembots in the form of his then-wife Vanessa. During the subsequently following assassination attempt, at the hands of Robin Spitz Swallows, she both informs Austin of Robin's involvement in the second plot and rescues him from the scene.

Felicity shows a penchant for using 6-shooter style weapons, particularly her .44 magnum. Other equipment she is known to sport includes a 1965 Chevrolet Corvette Stingray painted in the style of the Stars and Stripes and a necklace with a Greek female symbol, a stark contrast to Austin's Greek male symbol.

She confesses her feelings for Austin directly to him, immediately afterwards attempting to seduce him and accomplishing nothing. She is the only actual girl to have been turned down by Austin in a sexual advance, as far as we know. Vanessa also has been turned down, but the legitimacy of Austin turning her down is up for debate because of her non-human status. This is especially odd in regards to Felicity, considering Austin has even been flirtatious with married women, like Vanessa's mother, Mrs. Kensington. However, it is revealed the following day that the only reason Austin did not give in to her advances was because of the loss of his mojo as Austin feared Felicity she would not be interested in him if she knew he was sexually impotent. She continues to wear skimpy clothing and make sexual advances on Austin throughout the duration of her time with him, even during moments of impending doom.

Felicity also, despite later affirming that he never lost it to begin with, questions Austin's logic when accusing him of taking out his frustrations from his assumed loss of Mojo on her. This is in stark contrast to her attempting to console Fat Bastard, despite the fact she resorts to kicking him in the testicles when he proves inconsolable. She immediately rectifies her harsh words by confessing to Austin that not only does she want to be with him sexually, but also idolizes him. However, there may be a degree of legitimacy to her questioning his mental faculties at this point, as during the subsequent events, Felicity is murdered by Dr. Evil in a scheme involving making Austin choose between the population of Earth and his new romantic interest. Austin travels back in time to prevent this from happening, thus creating both Past and Present Austin, as well as the subsequent timeline where Felicity remains murdered.

She is shown to help Austin cope with the changing times, as demonstrated by her willingness to participate and instigate parties. Despite her crude and blunt methodologies, Felicity is an empathetic soul who will even offer help to enemies, but not at the expense of her or Austin's well-being, as demonstrated by her psychiatric consoling of Fat Bastard and subsequent kicking of his testicles upon him voicing his desire to "... kill them anyways."

It is a possibility, but not likely, that her name may be misleading. She references herself as "Shag very well by reputation," yet Fat Bastard contradicts this by stating she was "crap." This could be a deliberately falsified statement, however, as Fat Bastard could simply be taking advantage of the opportunity to insult her while she's captive, especially given Austin's presence during the comment in question. It is even implied that this comment is more directed towards Austin than Felicity and accuses him of having lowered his standards in order to sleep with a "crap" partner. Instead, it is far more likely that she does, indeed, "Shag very well," as evidenced by her high rank in the CIA. It is also further implied that her sexual prowess is powerful enough to keep up in a threesome with both past and present Austin, a feat no other Powers Girl has accomplished. Fat Bastard himself further complicates this claim by making a sexual advance towards Felicity during his final assassination attempt of both her and Austin at Austin's Pad. This could, however, be another jeer directed more towards Austin's alleged lower standards, although this is unlikely as Austin has clearly demonstrated that he's retained his Mojo.

Felicity does not appear during the events of Goldmember. In the novel tie in it's revealed that Felicity left Austin because he's still in love with Vanessa Kensington. This is odd, considering that Vanessa turned out to to be fembot and Austin has watched Felicity die at least once, making the claim, "I love you, Felicity. I love you." This claim is in stark contrast to Mrs. Kensington's comments to Vanessa in regards to Austin's loyalty.

In other languages, the character is known by the following names: 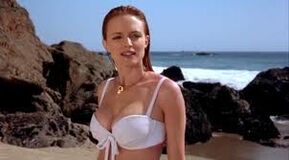 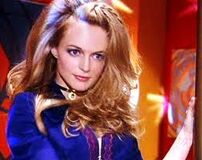 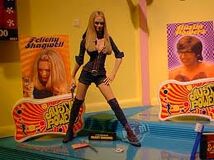 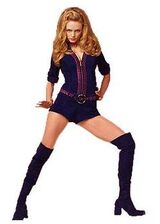 Add a photo to this gallery
Retrieved from "https://austinpowers.fandom.com/wiki/Felicity_Shagwell?oldid=7781"
Community content is available under CC-BY-SA unless otherwise noted.