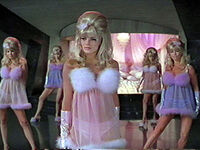 In the initial testing phase, the Fem-bots were revealed on pedestals in a simple room decorated with rocks and lights, wearing outfits consisting of silver hot pants and halter top bras covered with grommets along with white gloves and Go-Go boots. Upon activation, strutting sexily off the pedestal platforms the Fem-bots easily seduced and lethally dispatched a squad of five armed guards using the firearms concealed in their large breasts after bringing them under their spell simply by silently giving them a smoldering look and subtle, seductive movements.