"Dr. Evil, i would like you to meet your son. SCOTT!." -Frau Farbissina

Frau Farbissina ( Frau Kaput in Spain) is a character from the Austin Powers series of movies, played by Mindy Sterling (not to be mistaken for Rhea Perlman). She is the attack and defense specialist for Dr Evil. The character is based on From Russia with Love's Rosa Klebb, with additional inspiration from On Her Majesty's Secret Service Irma Bunt. Her appearance and demeanor, as well as her tendency to scream, are further inspired by a female Nazi officer that appeared in Indiana Jones and the Last Crusade. She is the chief henchwoman of Dr. Evil and started the militant wing of the Salvation Army. Her name, "Farbissina" is a take-off of the Yiddish word for "farbissen" or "embittered" in other words, a vocal person. Furthermore, "Frau" (German for "Mrs." and "woman") actually seems to be her first name. She have a strong German accent and often enjoys speaking the language.

Somewhere in the first two movies, Frau founds the militant wing of the Salvation army and falls in love with Una Brau, a woman with a unibrow at the LPGA . In 1999, in The Spy Who Shagged Me, she admits this relationship. However, when Dr. Evil went back in time to 1969, he met Frau before she realized she was a lesbian and had sexual intercourse with her (making her bisexual). It turns out that her child is Scott, who previously thought to be a test-tube baby. Unlike Dr. Evil's relationship with his son, she is actually close with Scott and cares about his well being. In the first film, International Man of Mystery (before it was publicly revealed that she was Scott's mother) Dr. Evil is about to press a button that would kill Scott for his insolence by burning him alive, but Frau swats his hand away, then winks at Scott. At the end of the second film, she makes a surprise guest appearance to Scott on the Jerry Springer show and tells him that she is his mother, but she never told him because she didn't want him to be hurt. In the third movie, it is hinted that Dr. Evil and Frau still have a relationship, due to a scene in prison where they make up, although this may just be a cover for Frau to slip Dr. Evil a key to his handcuffs.

Farbissina has many catchphrases, which are all shouted: "Bring in the FemBOTS!", "Laser ON!", and "Fire the lasER!". She is known for her rather loud voice, which makes characters, usually Dr. Evil, jump. In the first movie,her participation is bigger and important,but in the third movie,her appearance is smaller. Frau is middle-aged,having black and gray metallic hair { brown in her youth} and black again in the third movie,though she appears with a brown hair at the beginning of Austin Powers in Goldmember. Her traditional clothing is black leather jacket with tie and a black vest behind. Frau possesses a small whip. In a deleted scene of Goldmember,she appears in the musical number of What's It All About,Austin?, sat in a stripper's back,with latex suit,a whip and a leach in his mouth,using sadomasochism with him. 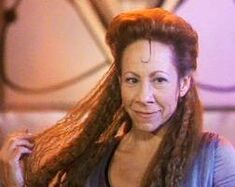 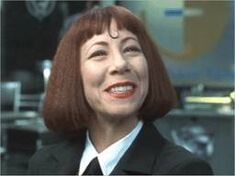 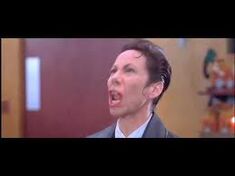