Before Dr. Evil was sent back in time to 1969, his henchmen made him a clone, which was identical in every way, but was "one-eighth his size". Upon being introduced to his clone, Dr. Evil immediately declared, "Breathtaking. I shall call him... Mini-Me."

In Austin Powers: The Spy Who Shagged MeEdit

In Austin Powers in GoldmemberEdit

Mini-Me was originally designed to be exactly like Dr. Evil in every way, except he was much smarter and stronger (as well as completely mute). He became "the son he never had", which earned the jealousy and hatred of Dr. Evil's biological son Scott Evil.

Mini-Me likes to use the peace gesture when he wants to be friends with someone.

If he does not like someone, he will usually flip them off as a means of insulting them (even though he only uses it once during the third film). On most other occasions, he prefers to express himself through written notes.

Overall, Mini-Me has proven that despite being a clone of Dr. Evil and originally one of his henchmen, he is truly a good and reliable person at heart. 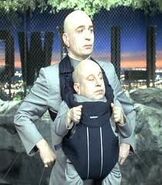 Add a photo to this gallery
Retrieved from "https://austinpowers.fandom.com/wiki/Mini-Me?oldid=7789"
Community content is available under CC-BY-SA unless otherwise noted.