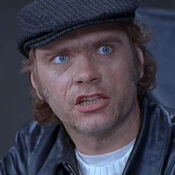 "They're always after me lucky charms." -Patty O'Brien

Patrick "Patty" O'Brien (Paul Dillon) is Dr. Evil's Irish henchman in the first movie. He is known for placing a charm from his charm bracelet on the dead bodies of his victims and worries that Scotland Yard are "always after me lucky charms.", he is annoyed and confused as to why people always laugh when he says that.

He is a parody of Red Grant, the assassin in the Bond film From Russia with Love. He has the voice of the leprechaun from the Lucky Charms commercials as noted by Frau.

During an assassination attempt on Austin Powers he tried to kill Austin in the bathroom of a casino, but he is drowned in a toilet and his charm bracelet broke, while a cowboy looks on and asks Austin what he ate.

Retrieved from "https://austinpowers.fandom.com/wiki/Patty_O%27Brien?oldid=8082"
Community content is available under CC-BY-SA unless otherwise noted.