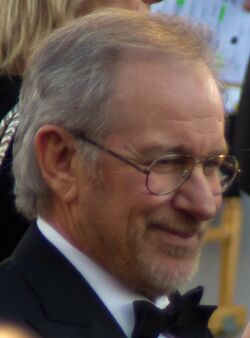 Steven Allan Spielberg, KBE (born December 18, 1946 in Cincinnati) is an American film director, screenwriter, and producer. He has won three Academy Awards, as well as an Irving G. Thalberg Memorial Award, and ranks among the most successful filmmakers in history in terms of both critical acclaim and popular success. His films have however also been derided as the archetype of modern Hollywood blockbuster film-making (commercialism over artistic purposes).

First coming to attention directing adventure films, Spielberg is noted in recent years for his willingness to tackle emotionally powerful issues, such as the horrors of the Holocaust in Schindler's List, slavery in Amistad, hardships of war in Saving Private Ryan, and terrorism in Munich. One consistent theme in his family-friendly work is a childlike, even naïve, sense of wonder and faith, as attested by works such as Close Encounters of the Third Kind, E.T. the Extra-Terrestrial, Hook, A.I., and Super 8, and the challenging role of a father-figure, apparent in War of the Worlds and Indiana Jones and the Last Crusade.

Spielberg is the most financially successful motion picture director of all time. He has directed and/or produced an astounding number of major box office hits, giving him great influence in Hollywood. As of 2004, he has been listed in Premiere and other magazines as the most "powerful" and "influential" figure in the motion picture industry.

In 2005, Empire magazine created a list of the 50 greatest film directors of all time. Spielberg was number one on the list.

He has been nominated for six Academy Awards for Best Director, winning two of them for Schindler's List and Saving Private Ryan, and seven of the films he directed were up for the Best Picture Oscar Schindler's List won. He is seen as a figure who has the influence, financial resources, and acceptance of Hollywood studio authorities to make any movie he wants to make, be it a mainstream action-adventure movie such as (Jurassic Park), or a three-hour-long black and white drama about the Holocaust (Schindler's List).

In 2001, he was given the honor of Knight Commander of the British Empire (KBE) by Queen Elizabeth II.

Spielberg's films often deal with several recurring themes. Most of his films deal with ordinary characters searching for or coming in contact with extraordinary beings or finding themselves in extraordinary circumstances. In an AFI interview in August 2000 Spielberg commented on his interest in the possibility of extra terrestrial life and how it has influenced some of his films. Spielberg described himself as feeling like an alien during childhood, and his interest came from his father, a science fiction fan, and his opinion that aliens would not travel light years for conquest, but instead curiosity and sharing of knowledge.

A strong consistent theme in his family-friendly work is a childlike, even naïve, sense of wonder and faith, as attested by works such as Close Encounters of the Third Kind, E.T. the Extra-Terrestrial , Hook, and A.I. Artificial Intelligence. According to Warren Buckland, these themes are portrayed through the use of low height camera tracking shots, which have become one of Spielberg's directing trademarks. In the cases when his films include children E.T. the Extra-Terrestrial, Empire of the Sun, Jurassic Park, etc.), this type of shot is more apparent, but it is also used in films like Munich, Saving Private Ryan, The Terminal, Minority Report, and Amistad. If one views each of his films, one will see this shot utilized by the director, notably the water scenes in Jaws are filmed from the low-angle perspective of someone swimming. Another child oriented theme in Spielberg's films is that of loss of innocence and coming-of-age. In Empire of the Sun, Jim, a well-groomed and spoiled English youth, loses his innocence as he suffers through World War II China. Similarly, in Catch Me If You Can, Frank naively and foolishly believes that he can reclaim his shattered family if he accumulates enough money to support them.

The most persistent theme throughout his films is tension in parent-child relationships. Parents (often fathers) are reluctant, absent or ignorant. Peter Banning in Hook starts off in the beginning of the film as a reluctant married-to-his-work parent who through the course of his film regains the respect of his children. The notable absence of Elliott's father in E.T., is the most famous example of this theme. In Indiana Jones and the Last Crusade, it is revealed that Indy has always had a very strained relationship with his father, who is a professor of medieval literature, as his father always seemed more interested in his work, specifically in his studies of the Holy Grail, than in his own son, although his father does not seem to realize or understand the negative effect that his aloof nature had on Indy (he even believes he was a good father in the sense that he taught his son "self reliance," which is not how Indy saw it). Even Oskar Schindler, from Schindler's List, is reluctant to have a child with his wife. Munich depicts Avner as a man away from his wife and newborn daughter. There are of course exceptions; Brody in Jaws is a committed family man, while John Anderton in Minority Report is a shattered man after the disappearance of his son. This theme is arguably the most autobiographical aspect of Spielberg's films, since Spielberg himself was affected by his parents' divorce as a child and by the absence of his father. Furthermore to this theme, protagonists in his films often come from families with divorced parents, most notably E.T. the Extra-Terrestrial (protagonist Elliot's mother is divorced) and Catch Me If You Can (Frank Abagnale's mother and father split early on in the film). Little known also is Tim in Jurassic Park (early in the film, another secondary character mentions Tim and Lex's parents' divorce). The family often shown divided is often resolved in the ending as well. Following this theme of reluctant fathers and father figures, Tim looks to Dr. Alan Grant as a father figure. Initially, Dr. Grant is reluctant to return those paternal feelings to Tim. However, by the end of the film, he has changed, and the kids even fall asleep with their heads on his shoulders.

Most of his films are generally optimistic in nature. Critics frequently accuse his films of being overly sentimental, though Spielberg feels it is fine as long as it is disguised. The influence comes from directors Frank Capra and John Ford. 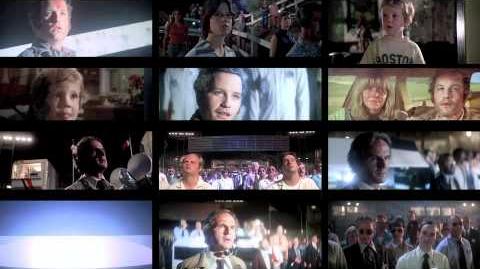 A video essay titled "The Spielberg Face" focuses on Spielberg’s use of close-ups throughout his career. This essay makes the case that Spielberg has deployed the venerable cinematic technique as skillfully, and as thoughtfully, as anyone before or since, using it to depict everything from "sudden shock or creeping dread" to "the trauma of remembering the past, or of confronting the future, discovering humanity in another person, or discovering humanity in oneself." Spielberg has used the close-up as a stand-in for the audience’s reaction to the movies, and that, through his close-ups, Spielberg has interrogated that reaction, and its meaning, in film after film, starting with Close Encounters of the Third Kind. The essay calls this work the "breakthrough" for the director, a movie that is less about aliens than it is "about Spielberg discovering the full power of the face" and exploring "the perpetual wonder of seeing things new." The essay moves forward through Spielberg's work, stopping at A.I.: Artificial Intelligence, which it calls Spielberg’s "most profound" reflection on the face and what it reveals.

Steven Spielberg plays himself in Goldmember. He is the director of the film within the film Austinpussy.

Retrieved from "https://austinpowers.fandom.com/wiki/Steven_Spielberg?oldid=5226"
Community content is available under CC-BY-SA unless otherwise noted.