The Spy Who Shagged Me[]

In the second Austin Powers film, after having sex with Austin on their honeymoon, Vanessa is quickly revealed as a Fembot when Austin inadvertently controls her with his television remote. She soon after attempts to kill him and self-destructs. Austin grieves for 20 seconds before getting over it, realizing that without a monogamous partner to commit to, he's single again and can return to his old lifestyle.

With the revelation that she's a Fembot, it's implied that she was programmed with a sly and manipulative mind and knew how to gradually and effectively draw in her prey with a complicated, yet subtle, form of seduction.

Vanessa has a slim, busty and curvaceous build with brown hair and crystal blue eyes just like her mother. She wore a variety of outfits in her time with Austin, such as a grey business suit with a skirt, high heels and a pair of glasses for her work at the Ministry of Defense, a white, sleeveless turtleneck shirt with light brown pants for casual attire, a black halter neck cocktail dress for formal occasions, a silver, "quasi-futuristic" prisoner dress with high heel boots forced on to her by Dr. Evil's minions, a black leather catsuit (similar to the one her mother wore) for military operations, and a black silk nightdress with thin straps and a white lace trim for coitus. Before her death, she also wore a wedding ring on her left hand.

Underneath her beautiful synthetic appearance, at least from what's been shown on the head, is a metallic face with exposed wires, a circular speaker where a mouth should be, a small, triangular nose, big eyebrows, and black, emotionless eyes displaying LED 0s. Before self-destructing, her eyes act as countdown timers. Like all Fembots, she had two silver gun barrels (hers functioning like machine guns) that protruded from her breasts.

They would get married after foiling Dr. Evil's plot, though the marriage would be short-lived as Vanessa was revealed to be a Fembot. Her death occurred soon afterwards by self-destruction.

Basil Exposition worked with Vanessa Kensington in British Intelligence. He had a lot of respect for her skills and talents, calling her "one of our top agents." He was also aware that she was a Fembot, although he never revealed this information to Austin.

Although Vanessa's reveal as a Fembot was played for laughs as a reference to all of the James Bond series' one-time female leads, it has become the most controversial moment in the entire Austin Powers franchise, leaving many fans of the character in denial and anger over how she was written out. It is highly questioned how Vanessa can be a Fembot, as she has a mother (and a father) and talks to her on the phone. Also, the Fembots were built in secret over the course of 30 years, making the circumstances of her creation a complete mystery. Lastly, her pre-recorded message from Dr. Evil is incredible, since he had been in cryogenic stasis for those 30 years, and the Fembots weren't made known to him until well after Austin and Vanessa met.

It is widely speculated, although not confirmed (nor denied), that Vanessa was at some point in the film replaced with a Fembot doppelganger. Fans of the films believe that Dr. Evil secretly had her killed (and disposed of her body) before the end of the film, despite the current lack of evidence to support their claims. 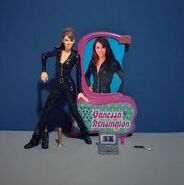 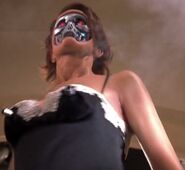 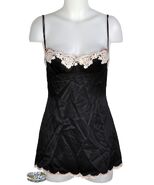